Larry is a nationally recognized economic development leader with more than 30 years of local and state government, not-for-profit and private sector experience.  Throughout his career, Larry has worked on approximately 550 economic development projects resulting in over $11 billion in capital investment, the creation of over 85,000 new jobs, and the retention of over 170,000 existing jobs.  Named by Governing Magazine as one of the nation’s best economic development officials, Larry is a member of The Site Selector’s Guild, an internationally recognized site selection organization, and is a regular speaker and panelist at conferences throughout North America.

Prior to founding Ginovus in 2002, Larry worked in a variety of economic development settings, including Deputy Director of Business Development for the Indiana Department of Commerce, Senior Advisor to the Mayor of the City of Indianapolis for Economic and Workforce Development, and President of the Indianapolis Economic Development Corporation (Develop Indy and Indy Partnership).  Additionally, Larry was instrumental in the launch and leadership of the Indianapolis and Central Indiana Technology Partnership (TechPoint), an initiative designed to nurture growing and emerging technology companies throughout Indiana. 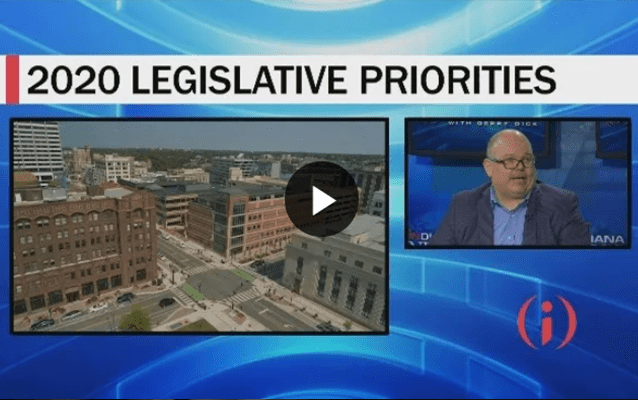 Larry Gigerich looks ahead at the priorities for economic development in the 2020 legislative session as part of a recent segment for Inside Indiana Business.
WATCH NOW:
https://www.insideindianabusiness.com/clip/14955125/perspective-on-2020-priorities-for-indiana-general-assembly

Larry Gigerich walks the Indy Chamber through feedback received from Indy’s bid for Amazon HQ2, and the value in a central repository of marketing and research assets to benefit the region’s efforts to succeed.
WATCH NOW: https://indychamber.com/news/in-video-state-of-the-region/

Larry Gigerich is spotlighted as an Indiana Chamber of Commerce 2019 Samuel C. Schlosser Volunteer of the Year. The following video was shown at the Awards luncheon where Larry was presented with the award.
WATCH NOW: https://www.youtube.com/watch?time_continue=1&v=Rr_Nt5m8CWU

Larry Gigerich participates on a Quality of Life panel discussion featured on Inside Indiana Business.