Reliance on a community’s telecom and energy infrastructure has heightened the importance of these factors in the location decision-making process for both the providers and users of cloud computing services and the IoT.

According to Bessemer Venture Partners’ “The State of the Cloud 2015” report, the cloud-based computing market is projected to grow at a compounded annual growth rate (CAGR) of 22.8 percent from 2014 to 2018, and 62 percent of all customer relationship management (CRM) software will be cloud-based by 2018. What’s more, the number of Internet of Things (IoT) connected devices is predicted to surge to 38.5 billion by 2020; a rise of over 285 percent.This is not new or surprising news, but it’s significant when considering that software as a service (SaaS) will likely affect nearly all industries, and we are only at the dawn of this new age. The trickle down impact on the telecommunications and power industry is significant. The infrastructure capacity required to support cloud computing will undoubtedly become an increasingly critical component for companies and the communities and states in which they are located.

Moving to Cloud-Based Systems
According to The National Institute of Standards and Technology, “Cloud computing is a model for enabling convenient, on-demand network access to a shared pool of configurable computing resources (networks, servers, etc.) that can be rapidly provisioned and released with minimal management effort or service provider interaction.”Most industries have a keen interest in lowering costs through reducing expenses and streamlining technology operations to drive efficiency. Cloud-based applications can provide single-entry data capabilities and access to real-time data, and enable real-time collaboration and mobility. Reducing dependency on hardware, on-premises server rooms, cooling systems, and maintenance provides companies with tangible cost and time savings.
The infrastructure capacity required to support cloud computing will undoubtedly become an increasingly critical component for companies and the communities and states in which they are located.

One of the key components to the cloud’s success is the pooling or sharing of certain resources — similar to what occurs in the multitenant office building model. The cloud provider serves multiple customers with different physical and virtual resources by sharing storage, processing, memory, network bandwidth, servers, and other technology infrastructure. The real uniqueness, however, is the ability of the cloud provider to serve different customers and industries, all with different usage patterns. Patterns can vary due to physical location (i.e., customers from different countries, time zones, climates, etc.) or business practices. This can give the cloud provider, data centers, and their customers the best leverage for power and telecommunications use. However, it also provides great opportunity for utility service to be one of the most scrutinized factors in the site selection process for those in the cloud computing industry.In a traditional setting, information technology equipment (servers, storage, and communications gear) is stored on a system of racks. Computer room air conditioners (CRACs) deliver a cooling system to prevent the equipment from overheating. Data centers, however, have dedicated cooling systems and power delivery that typically has a high level of reliability. Uninterrupted power supply is available through a series of battery backups or flywheels. The power is distributed throughout, and backup generators are in place in the event of a power outage. Cloud-based application use allows any company or individual to eliminate the need for server rooms, A/C units, and the hardware investment necessary to run and maintain on-premises networks. Cloud computing gives the company the opportunity to only use what space is needed, as the servers are off-site, and the space to store data and run the applications is leased on an as-needed basis. Utilizing SaaS applications reduces and, in some cases, eliminates the capital-intensive model of the on-premise servers, upgrades, and maintenance.Locations are removed from consideration regularly in the site selection process due to inadequate utilities. A lack of water, electric, wastewater, or telecommunications infrastructure can toss a site from contention early in the location decision process. Even in a location where utilities are abundant, the cost of those utilities is of key importance when locating a cloud-based software company or data center. Ongoing operating expenses for power and telecom and robust infrastructure requirements for these industries consistently rank on the list of top important factors in making a location decision.

Telecom Infrastructure, Reliability
Access to fiber optics is an expectation for almost every industry. For those utilizing cloud-based services, fiber optics access is essential. For a community, the telecommunications infrastructure is critical in the retention and attraction of companies and the subsequent capital investment associated with them. Competitiveness and redundancy of the broadband services can make a location more attractive as well. Numerous options for providers and services drive down costs and increase broadband speeds.

It is possible that a company that has detailed energy requirements will need to also understand the fiber backbone structure of the locations under consideration. Depending on the cloud use and operational needs of a company, evaluating the number of Internet exchange points and network access points could become a component in the location decision-making process. Having access to multiple national or regional fiber backbone providers, including digital switches, is an important consideration for a company utilizing cloud services and a necessity to those providing cloud-based services. The ability to prioritize Internet traffic to avoid congestion and eliminate failure of cloud-based services is an ideal efficiency. A community that can offer multiple Tier 1 Internet service providers, and has the ability to seamlessly reroute traffic in the event of a failure, has a better opportunity to land projects operating with the use of cloud-based services.

There was a time when it was thought that a community needed to offer specific types of incentives in order to attract or retain businesses in the coveted technology industry. With the dawn of cloud computing, however, every company has, in some way, become a technology company.

Because of overlap between voice carriers and Internet backbone carriers, the largest voice carriers, such as AT&T, Verizon, and Sprint, own some of the largest Internet backbone networks. In turn, they sell their services to the Internet service providers. Those providers that are considered Tier 1 have comprehensive telecommunications networks, access points, and redundancies. Communities with multiple Tier 1 Internet service providers can create a more cost-competitive marketplace with more opportunities to reduce downtime risk.

The reliability of the Internet is critical in site selection. Whether a company has made the move to the cloud or not, odds are high that it’s dependent on Internet communications in order to continue to conduct everyday business. Understanding potential downtimes and redundancies will be key, as Internet connections are essential to company operations. And for the cloud provider, reliability is second only to security in the eyes of its customers. The risk of being offline must be minimal.

Energy Costs/Reliability
Power is one of the highest utility costs in operating any facility. For a cloud-based service provider, data center power consumption can easily total over half of the operating costs for the facility.

Electricity rates vary widely across the United States and are affected by many factors that impact site selection decisions. Fuel costs, power plant expenses, transmission and distribution costs, weather conditions, and regulations all affect the cost of energy. In 2014, the average price for commercial customers was 10.75 cents per kilowatt-hour. For industrial customers, the average price was 7.01 cents per kilowatt-hour. Rates can be lower for large energy consumers, such as data centers. 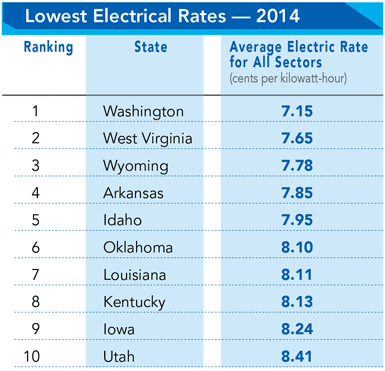 In a recent study by the National Resources Defense Council (NRDC), U.S. data centers consumed an estimated 91 billion kilowatt-hours of electricity, equivalent to the annual output of 34 large (500-megawatt) coal-fired power plants. Data center electricity consumption is projected to increase to roughly 140 billion kilowatt-hours annually by 2020, the equivalent annual output of 50 power plants, costing American businesses $13 billion annually in electricity bills. If worldwide data centers were a country, they would be the globe’s 12th-largest consumer of electricity, ranking between Spain and Italy.There is a 26.38 cent span per kWh between the least expensive and the most expensive electrical rates in the United States. Some of the cost difference is tied to how energy is generated. As an example, states in the Mountain and Northwest regions benefit from hydro and wind power generation. The Midwest States fall closer in line with the national average — Indiana (8.97), Illinois (8.87), Iowa (8.24), Kentucky (8.13), and Ohio (9.97) — but are at risk for seeing their rates increase due to more restrictive federal environmental regulations impacting energy generated from coal.Clean energy can be a factor for data center site selection. Google is using less than 1 percent of all data center energy used globally.5 Along with Apple and Facebook, Google is one of the most efficient consumers of energy. These companies are investing in renewable energy resources such as wind power to generate the electricity needed to help power their data centers. The same NRDC report states that 80–85 percent of energy consumption is not a product of the big data centers. This leaves a great number of organizations relying, at least in part, upon the cost and availability of non-renewable energy resources, such as coal-powered electricity.

With the expectation that non-data center facilities will become more reliant on cloud-based software and services, it is natural to consider the necessity of the reliability of a community’s power infrastructure. Much like telecommunications infrastructure, the redundancy and reliability of electricity is mission-critical to nearly all industries. Companies using cloud services, along with the cloud service providers, must be able to depend on the community where they are located to provide as minimal downtime risk as possible from the area’s power grid. Companies simply cannot have their operations go down.

The infrastructure of the power grid, its redundancies and even accessibility to multiple grids, continues to be important in daily operations and production. The addition of cloud computing gives all industries something new to consider.

Incentives and More
There was a time when it was thought that a community needed to offer specific types of incentives in order to attract or retain businesses in the coveted technology industry. With the dawn of cloud computing, however, every company has, in some way, become a technology company. Over time, communities have come to realize that technology companies are looking for the same attributes as non-tech companies when site selecting: human capital, favorable tax rates, low energy costs, a good quality of life, available real estate, and incentives.

Companies using cloud services, along with the cloud service providers, must be able to depend on the community where they are located to provide as minimal downtime risk as possible from the area’s power grid. Companies simply cannot have their operations go down.

There is a reliance on telecommunications and energy infrastructure like never before. A community that understands how to implement, maintain, and continually improve its telecommunications infrastructure will become increasingly attractive to a wide variety of industries. Solid utility infrastructure and affordable energy costs will never go out of favor, especially in the world of increasing regulation.As data center operators, service providers, and multi-tenant customers consider factors involved in selecting a site for new and growing businesses, a thorough evaluation of internal organizational structure and external contract arrangements, as they pertain to energy and telecom usage, will need to be conducted. Developing “green” contracts and investment in energy efficiency should be rewarded. Communities need to evaluate current and future plans for telecommunications and power infrastructure with the knowledge that shared data space and cloud-based computing will be increasing at a rapid pace. Nearly one-third of leased data center space in the United States is due to come up for renewal in the next few years. Nearly all of those leases are based on square footage. The optimum can be accomplished with collaboration between owners, tenants, and communities to ensure the infrastructure and end-user costs work to the advantage of all parties.
by Larry Gigerich, Executive Managing Director

PrevPreviousGinovus is pleased to have assisted and advised Brite Systems in the expansion of its Indianapolis offices.
NextAdvanced Manufacturing Changing the Economic LandscapeNext